I have the RIGHT

Watch our new video and learn about sexual violence and the “I have the RIGHT…” campaign created by Project Envision NYC and La Casa Mandarina to start a dialogue to change the social norms that perpetuate oppression and sexual violence.

Thanks to our beloved coalition members, friends and partners for your unconditional support and encouragement throughout the years.

We envision and world without violence! Join the movement that is breaking the silence.

Here is the I have the RIGHT…  history!

“I have the RIGHT… ” in response to rape culture where survivors remain in silence out of fear and shame because society does not believe them or blame them.

The goal was to start a dialogue to change the social norms that perpetuate oppression and sexual and gender violence. It began in New York City but expanded to Mexico, Brazil, Thailand, India, Colombia, Serbia, Zimbabwe, Nicaragua and many other countries to share experiences with different agencies and communities around the world.

Over the past two years, we have been organizing activities to engage people in a dialogue on the root causes of sexual violence, including awareness events, conferences, workshops, debates, distribution and display of “I have the RIGHT…” posters and post cards, community discussion and mobilization, etcetera. We also presented an itinerant exhibit of photos of the campaign including people´s thoughts and feelings about what they have the RIGHT to do without someone choosing to oppress or abuse them.

I have the RIGHT… had a great response locally and abroad. It first started as a campaign to raise awareness about ways that our communities can invest in preventing sexual violence. However, through our work in different communities around the world, the campaign became a way of making visible the intersection of sexual violence with other forms of oppression, that one issue cannot be prevented without looking at another – racism, homophobia, xenophobia, poverty, homelessness, intimate partner violence, body-shaming, etcetera-. As a result, the campaign has grown to become a systematized, easily replicable and effective intervention project to empower communities from within and can be adapted to different contexts.

I have the RIGHT… is about exploring the underlying root causes of violence through allowing people the space to talk about sex, sexual violence, relationships, gender and social norms and oppression. It focuses on consciousness raising and empowerment- identifying how oppression affects all of us and finding the tools to prevent it in our day to day lives- as individuals, as families, as friends, and as communities. We also want to tell survivors it is not their fault, that we believe them and they are not alone.

I have the RIGHT… to live sexual violence free! (original poster)

Since then, they have been organizing activities to engage New York City in a dialogue on the root causes of sexual violence, including awareness events, debates, distribution and display of “I have the RIGHT…” posters and post cards, community discussion and mobilization, etcetera. They have also presented an itinerant exhibit of photos of the campaign including people´s thoughts and feelings about what they have the RIGHT to do without someone choosing to rape them.

On October 21st 2015 we host a fundraising event to celebrate the success of our “I have The RIGHT…” campaign.  Click here to see our event´s photos! 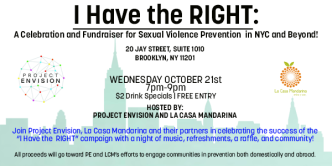 I have the RIGHT… to live domestic violence free.

La Casa Mandarina & Project Envision implemented an intervention project aimed at strengthening local agencies. Violence Intervention Program Inc. -VIP Mujeres– works with immigrant women survivors of Domestic Violence and their children in New York City. In different stages, we trained their staff (train the trainers), co-facilitated workshops with their clients in primary prevention, provided resources for survivors, and supported them to design their own “I have the RIGHT…”  campaign/project. 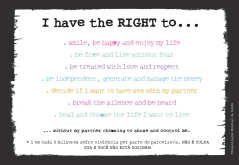 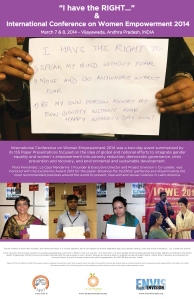 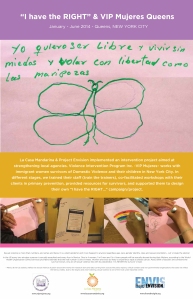 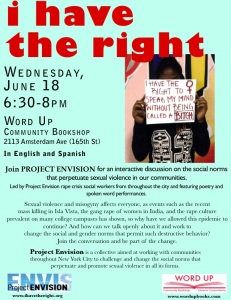 POSTCARDS….. I have the RIGHT to live rape free!

I have the Right to have a few drinks without someone choosing to rape me.

I have the Right to walk in any neighborhood without someone choosing to rape me. 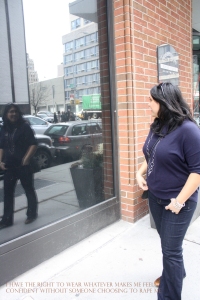 I have the Right to wear whatever makes me feel confident without someone choosing to rape me.

I have the Right to live my life making good decisions and bad without someone choosing to rape me. 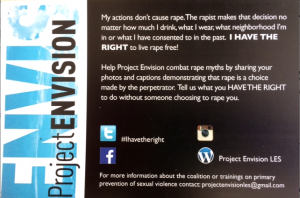 My actions don’t cause rape, the rapist makes that decision no matter how much I drink, what I wear, what neighborhood I’m in or what I have consented to in the past. I have a RIGHT… to live rape free!

This campaign is a series of images and captions that combat many common rape stereotypes by demonstrating that it is a choice made by the perpetrator.  Want to get involved?  Have your own ideas for a photo and caption? Post your photos of what you have the Right to do without someone choosing to rape you on Twitter @EnvisionLES, Facebook or in the comments below.  For more information about this project or how to get involved in this movement email Project Envision.

August 2013–“I have the RIGHT” campaign launch