Project Envision NYC is a community-based collective aimed at changing the social norms that perpetuate sexual violence and other forms of oppression through cultivating safe spaces for dialogue and creative expression.

By normalizing conversations surrounding sexual violence, we hope to be empowered as a community towards sustainable social change.

We envision a NYC that takes collective responsibility for ending sexual violence. 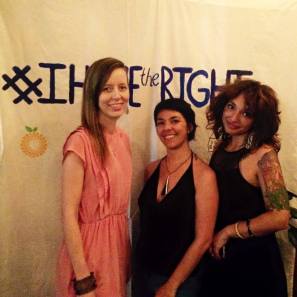 If you have any questions about our coalition or would like to become involved, please email: projectenvisionles@gmail.com

In 2014, our Co-leaders: Danielle Elleman, Chauntel Gerdes and Mora Fernández were awarded with The Lydia Martinez Multidisciplinary Collaboration Award by  NYC Alliance Against Sexual Assault for their work in Primary Prevention in sexual violence. This award recognizes excellent service by professionals involved in the coordinated response efforts to sexual violence in New York City, as well as individuals who seek to end sexual violence by addressing underlying conditions in our society that promote and permit sexual violence. Watch this video and learn more about the movement that is trying to end sexual violence.

Project Envision started as a multi-year pilot project dedicated to the development of primary prevention programming in various communities in New York. The first phase of this project was a community readiness of assessment of various neighborhoods in New York City. One of the beliefs of this project is that communities are in varying states of readiness to support primary prevention efforts. The New York City Alliance Against Sexual Assault along with rape crisis programs within New York City collaborated on a readiness assessment in which  the Lower East Side was selected for participation.

Following the selection of three New York City neighborhoods, each coalition conducted a Participatory Action Research (PAR) project. This research was aimed at determining the beliefs within the Lower East Side community about root causes of sexual violence and prevention strategies that will hopefully have an impact upon the community. Our research findings can be found in English and Spanish here.

Following the completion of the research phase of Project Envision, our coalition has worked to utilize the results in the development of prevention programming. In the upcoming months we will be working to implement a discussion series with Lower East Side parents to increase their capacity for discussing sexual violence with their children. Through this program we hope to increase community dialogue about the issue of sexual violence.

“I have the RIGHT… to live sexual violence free”

I have the RIGHT had a great response locally and abroad. It also became a systematized, easily replicable and effective intervention project to empower communities from within and can be adapted to different contexts. The campaign became a way of making visible other forms of oppression and abuse like domestic violence.

Here is more info about I have the RIGHT… project.